A man dreamed that near a certain bridge in the capital town there was a great treasure and that if he went there he could ﬁnd it. In the morning he laughed. He was a poor man, a poor rabbi. He laughed. He said, ’All nonsense. And it is so far – one thousand miles. And a dream is a dream.’ But the dream came again. Then he became a little suspicious. Maybe it was not just a dream. Maybe God was giving a hint. But still he could not gather enough courage to go one thousand miles just for a dream. He was a poor man and he would have to beg for the money to purchase tickets. And who knows whether that bridge exists or not? He had never been to the capital. But the third day the dream came again and with great persistence the dream said to him, ’You just go and find it. It is all yours. Just by the side of the bridge.’ An exact place was shown. Not only that, he could see the whole place, all the surroundings. It was so clear that he had to go. 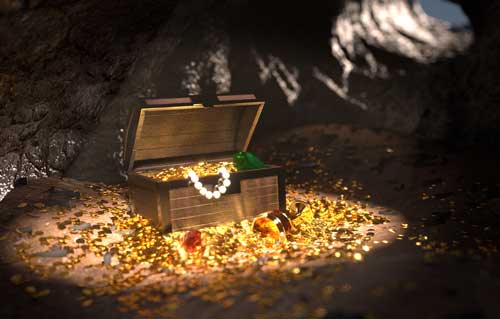 He travelled one thousand miles. Many times suspicions came, many times doubts came, but he said, ’It has to be finished. I have to go and see.’ He went and he was surprised. The bridge was there – exactly the same bridge that he had seen in the dream. Absolutely the same. The same surroundings, the same trees, and the same place that was shown. But there was a problem. In the dream there was no policeman and now he found that a policeman was constantly there. Shifts changed, but another came. For twenty-four hours there was someone there. He enquired why this policeman was standing there. People said, ’Because a few people have committed suicide from this bridge.’ But now it was a problem. He was moving round and round, around the place, coming this way, that way, and the policeman became suspicious about him. Seeing him coming and going so many times, one day he asked, ’What is the matter? Are you thinking of committing suicide? Don’t create trouble for me. Why are you constantly here? What do you want?’ And the rabbi said, ’Listen. I have nothing to do with the bridge. I am here because I had a dream. And the dream persisted.’ And he told the dream to the police-man. He said, ’This is the dream and where you are standing, just here, within three feet, there is a great treasure.’ And the policeman laughed uproariously and he said, ’You are a fool! But this is a mystery. I also had a dream that in a certain town’ – and it was the town in which the rabbi used to live – ’there lives a certain rabbi’ – and he was the rabbi – ’of a certain name. And I have been dreaming constantly about going there because underneath his bed there is a great treasure. But I never pay any attention to dreams. Dreams are dreams. You are a fool. I am not such a fool. I will not go one thousand miles and search for this small village and then search for this poor rabbi and then look under his bed. Dreams are dreams. You go back home!’ The rabbi rushed back home. He went and dug a hole underneath his bed and there was the treasure.

The treasure is within you, in your own home. Underneath your own consciousness, just within you. It has not to be searched for because all search means searching outside.