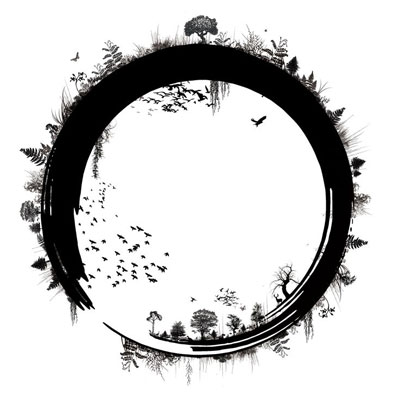 Zen Buddhism is a mixture of Indian Mahayana Buddhism and Taoism. It was brought to China by the Indian monk Bodhidharma in the 6th century, spreaded to Korea and Japan, and became very popular in the West from the mid 20th century. The essence of Zen is attempting to understand the meaning of life directly, without being misled by logical thought or language. Zen Buddhism focuses on attaining enlightenment through meditation as Siddharta Gautama (Buddha) did. Zen Buddhism teaches that all human beings have the Buddha-nature, or the potential to attain enlightenment, within them, but the Buddha-nature has been clouded by ignorance. To overcome this ignorance, Zen rejects the study of scriptures, religious rites, devotional practices, and good works in favor of meditation leading to a sudden breakthrough of insight and awareness of ultimate reality. Training in the Zen path is usually undertaken by a disciple under the guidance of a master. Zen often seems paradoxical - it requires an intense discipline which, when practised properly, results in total spontaneity and ultimate freedom. This natural spontaneity should not be confused with impulsiveness. Zen is a complete way of life, rather than an activity that one chooses and discards at will. It requires complete devotion to living a certain lifestyle. This often makes it very difficult for most people to become a true Zen.