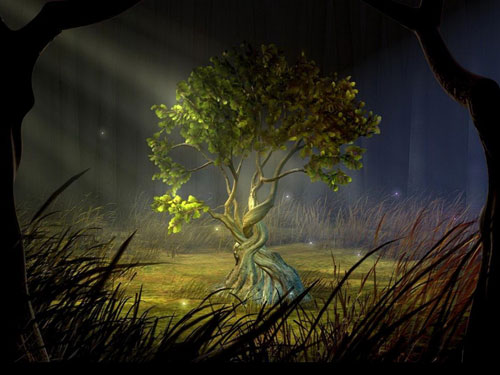 There is a parable about a poor man walking through the woods reflecting upon his many troubles. He stopped to rest against a tree, a magical tree that would instantly grant the wishes of anyone who came in contact with it. He realized he was thirsty and wished for a drink. Instantly a cup of cool water was in his hand. Shocked, he looked at the water, he decided it was safe and drank it. He then realized he was hungry and wished he had something to eat. A meal appeared before him. "My wishes are being granted," he thought in disbelief. "Well, then I wish for a beautiful home of my own," he said out loud. The home appeared in the meadow before him. A huge smile crossed his face as he wished for servants to take care of the house. When they appeared he realized he had somehow been blessed with an incredible power and he wished for a beautiful, loving, intelligent woman to share his good fortune. "Wait a minute, this is ridiculous," said the man to the woman. "I'm not this lucky. This can't happen to me." As he spoke...everything disappeared. He shook his head and said, "I knew it," then walked away thinking about his many troubles.