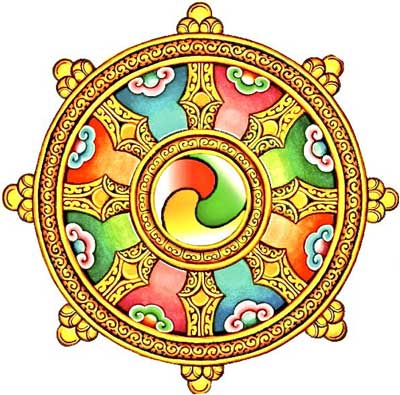 Buddhism is a spiritual tradition that focuses on personal spiritual development and the attainment of a deep insight into the true nature of life. It does not include the idea of worshipping a creator god, and that is the reason some people do not see it as a religion, but rather as a philosophy. The word Buddhism comes from budhi, which means to awaken. Buddhism originated from around 400BC, when Siddhartha Gotama, known as the Buddha, was himself awakened (enlightened) at the age of 35. Siddhartha Gotama was born into a royal family in Nepal. At 29, he realised that wealth and luxury did not guarantee happiness, so he explored the different teachings religions and philosophies of the day, to find the key to human happiness. After six years of study and meditation he finally found the middle path and was enlightened. After enlightenment, the Buddha spent the rest of his life teaching the principles of Buddhism — called the Dhamma, or Truth — until his death at the age of 80. The basic concepts in Buddhism can be summed up by the Four Noble Truths: Life is suffering Suffering is caused by craving and aversion Suffering can be overcome and happiness (Nirvana) can be attained There is a path to Nirvana which is made up of eight steps, sometimes called the Eightfold Path The Eightfold Path to Nirvana is to be "right" in all these areas: concentration, views, speech, resolve, action, livelihood, effort, and mindfulness. The basic tenets of Buddhist teaching are straightforward and practical: nothing is fixed or permanent; actions have consequences; change is possible. Buddhism is the world's fourth-largest religion, with over 500 million followers, mostly in southeast asia. Countries with most buddhist population are China, Japan, Thailand, Myanmar and Vietnam.