tibetan story as told by Osho

A young man was very much interested in the esoteric, in the mysterious. He found a saint who was known to have many secrets, but it was very difficult to get any secret from him. The young man said, "I will see. I will devote my whole life to his service, and I will get the secrets, the mysteries." So he remained with the old saint. The old saint told him, "You are unnecessarily wasting your time. I don’t have anything, I am just a poor old soul. Because I don’t speak, people think I am keeping some secret. But I don’t have anything to say, so I remain silent." But the man said, "I cannot be persuaded so easily. You will have to give me the secret which opens the door of all the mysteries." Tired of the young man, because twenty-four hours a day he was there, the poor old saint had to arrange for his food, had to ask somebody to take care for his clothes; the winter was coming and he would need more clothes. It had become a burden. Finally the old man got fed up. He told the young fellow, "Today I am going to tell you the secret. It is not very difficult. It is very simple." 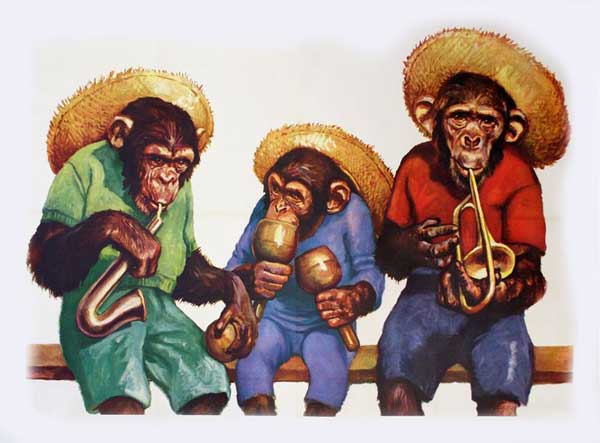 He said, "Everything is hidden in Om mani padme hum." But the young man said, "Don’t befool me! Everybody knows this mantra, it is not a secret. It is the most widely known mantra to the Tibetans." He said, "It is true, it is widely known. But the key is not known to them for opening it. Do you know the key for opening it?" The young man said, "Key? I have never heard that there is a key to open a mantra." "That is the secret! The key is, while you are repeating the mantra — just for five minutes — just don’t let any monkey pop into your head." He said, "You seem to be an old idiot! In my whole life I have never thought of a monkey. Why should I think of one?" He rushed down the stairs of the temple where the old saint lived. But strangely, even though he was not reciting the mantra, monkeys started coming, giggling. He would close his eyes and they would be there. He would run to this side and they would be there. They were not outside, they were inside his head. And slowly slowly the crowd was becoming bigger. As far as he could see, only monkeys and monkeys, and doing all kinds of circus! He said, "My god, this is the key? I am finished! I have not even started the mantra." Finally he said, "Let me take a good bath and get rid of all these monkeys." But the more he pushed them away, the more they jumped towards him. He took the bath, he burned incense, he sat in a religious lotus posture, but whatever he was doing, monkeys were watching from every side. He said, "It is strange — monkeys have never visited this house…" The whole night he tried, but he could not repeat this simple mantra Om mani padme hum without monkeys jumping in. By the morning he was so tired. He said, "This old saint, I will kill him! What kind of key…?" In the morning he rushed to the old saint and said: "Please take away your key. I am almost mad!" The old man said, "That’s why I was not telling anybody, because the key is very difficult. Now do you understand why I was silent?" He said, "I don’t want to listen to a single word from you. You just take this key back and let me go home. And I don’t want these monkeys to follow me!" The saint said, "If you give back the key, never repeat the mantra again. The monkeys will come! I cannot help it, they are not in my power." The man dropped the mantra, he dropped the key. He descended the same steps and there was no monkey at all. He closed his eyes and there was no monkey. He looked all around and there was no monkey. "It is strange…", he thaught to himself. But on the way, he tried just once, to see what happens when he says Om mani padme hum and closes his eyes. And they were all coming, from all directions!

In tibet there is a common mantra which religious people repeat: Om mani padme hum.