how to catch monkeys 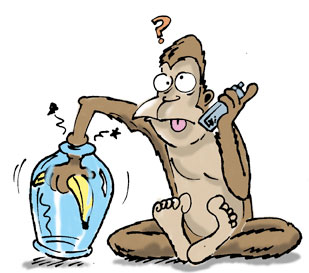 Once upon a time there was a monkey who was very fond of cherries. One day he saw a delicious-looking cherry, and came down from his tree to get it. But the fruit turned out to be in a clear glass bottle. After some experimentation, the monkey found that he could get hold of the cherry by putting his hand into the bottle by way of the neck. As soon as he had done so, he closed his hand over the cherry; but then he found that he could not withdraw his fist holding the cherry, because it was larger than the internal dimension of the neck. Now all this was deliberate, because the cherry in the bottle was a trap laid by a monkey-hunter who knew how monkeys think. The hunter, hearing the monkey's whimperings, came along and the monkey tried to run away. But, because his hand was, as he thought, stuck in the bottle, he could not move fast enough to escape. But, as he thought, he still had hold of the cherry. The hunter picked him up. A moment later he tapped the monkey sharply on the elbow, making him suddenly relax his hold on the fruit. The monkey was free, but he was captured. The hunter had used the cherry and the bottle, but he still had them.