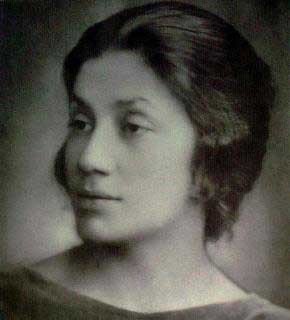 Desanka Maksimović was a Serbian poet, professor of literature, and a member of Serbian Academy of Sciences and Arts. She graduated from the gymnasium in Valjevo and the University of Belgrade Faculty of Philosophy. Desanka Maksimović was a professor of Serbian language from 1923 until 1953 in several schools. One of her best students was Mira Alečković, who also became a Serbian poet and a close friend of Desanka Maksimović. In August 1933 she married Sergej Slastikov, but they had no children of their own. When Desanaka Maksimovic heard of German soldiers shooting primary school children in Kragujevac, she wrote "Krvava Bajka" (A Bloody Fairy Tale), a poem that speaks of the terror practiced by German army in World War II. The poem was not published until after the war had ended. Her poetry spoke about love and patriotism; it was enthusiastic and youthful, yet serious and sensitive. Desanka Maksimović won a number of literature awards. She died on February 11, 1993, in Belgrade, at the age of 95. She was buried in Brankovina, where she grew up.