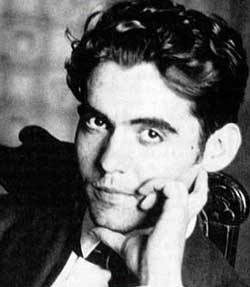 Federico del Sagrado Corazón de Jesús García Lorca, known as Federico García Lorca is one of the most important Spanish poets and dramatists of the twentieth century. García Lorca in Fuente Vaqueros, a small town a few miles from Granada. His father, Federico García Rodríguez, was a landowner with a farm in the fertile vega surrounding Granada and a comfortable villa in the heart of the city. García Lorca's mother, Vicenta Lorca Romero, was a teacher and gifted pianist. In 1909, when the boy was 11, his family moved to the city of Granada. For the rest of his life, he maintained the importance of living close to the natural world, praising his upbringing in the country After graduating from secondary school García Lorca attended Sacred Heart University where he took up law along with regular coursework. His first book, Impresiones y Viajes (1919) was inspired by a trip to Castile with his art class in 1917. In 1919, García Lorca traveled to Madrid, where he remained for the next fifteen years. Giving up university, he devoted himself entirely to his art. He organized theatrical performances, read his poems in public, and collected old folksongs. During this period García Lorca wrote El Maleficio de la mariposa (1920), a play which caused a great scandal when it was produced. He also wrote Libro de poemas (1921), a compilation of poems based on Spanish folklore. Much of García Lorca’s work was infused with popular themes such as Flamenco and Gypsy culture. In 1922, García Lorca organized the first “Cante Jondo” festival in which Spain’s most famous “deep song” singers and guitarists participated. The deep song form permeated his poems of the early 1920s. During this period, García Lorca became part of a group of artists known as Generación del 27, which included Salvador Dalí and Luis Buñuel, who exposed the young poet to surrealism. In 1928, his book of verse, Romancero Gitano (“The Gypsy Ballads”), brought García Lorca far-reaching fame; it was reprinted seven times during his lifetime. From 1925 to 1928 he was passionately involved with Dalí. The friendship with Lorca had a strong element of mutual passion, but Dalí rejected the erotic advances of the poet. With the success of "Gypsy Ballads", came an estrangement from Dalí and the breakdown of a love affair with sculptor Emilio Soriano Aladrén. These brought on an increasing depression, a situation exacerbated by his anguish over his homosexuality. He felt he was trapped between the persona of the successful author, which he was forced to maintain in public, and the tortured, authentic self, which he could only acknowledge in private. He also had the sense that he was being pigeon-holed as a "gypsy poet". Growing estrangement between García Lorca and his closest friends reached its climax when surrealists Dalí and Luis Buñuel collaborated on their 1929 film Un Chien Andalou (An Andalusian Dog). García Lorca interpreted it, perhaps erroneously, as a vicious attack upon himself. At this time Dalí also met his future wife Gala. Aware of these problems (though not perhaps of their causes), García Lorca's family arranged for him to take a lengthy visit to the United States in 1929–30. In 1929, Federico García Lorca moved to New York City. The poet’s favorite neighborhood was Harlem; he loved African-American spirituals, which reminded him of Spain’s “deep songs.” In 1930, García Lorca returned to Spain after the proclamation of the Spanish republic and participated in the Second Ordinary Congress of the Federal Union of Hispanic Students in November of 1931. The congress decided to build a “Barraca” in central Madrid in which to produce important plays for the public. “La Barraca," the traveling theater company that resulted, toured many Spanish towns, villages, and cities performing Spanish classics on public squares. Some of García Lorca’s own plays, including his three great tragedies Bodas de sangre (1933), Yerma (1934), and La Casa de Bernarda Alba (1936), were also produced by the company. In 1936, Federico Garcia Lorca was staying at Callejones de García, his country home, at the outbreak of the Civil War. He was arrested by Franquist soldiers, and on August 19, after a few days in jail, soldiers took García Lorca to “visit” his brother-in-law, Manuel Fernandez Montesinos, the Socialist ex-mayor of Granada whom the soldiers had murdered and dragged through the streets. When they arrived at the cemetery, the soldiers forced García Lorca from the car. They struck him with the butts of their rifles and riddled his body with bullets. His books were burned in Granada’s Plaza del Carmen and were soon banned from Franco’s Spain. To this day, no one knows where the body of Federico García Lorca rests.