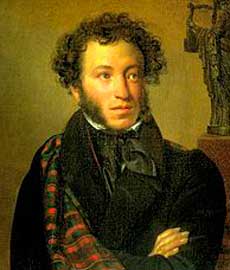 Alexander Sergeyevich Pushkin (Алекса́ндр Серге́евич Пу́шкин) was a Russian author of the Romantic era who is considered by many to be the greatest Russian poet and the founder of modern Russian literature. The major part of his lyrical poetry was written between 1820 and 1830, but some of his poetical masterpieces were composed in the last seven years of his life, when he was turning his attention to prose. A development can be traced from the sparkling ebullience of his early verse - the crowning achievement of which is the first chapter of Evgeny Onegin, written in 1823 -- to the concetrated expressiveness and restrained power of his later poetry. By effecting a new synthesis between the three main ingredients of the Russian literary idiom -- the Church Slovanic, the Western European borrowings, and the spoken vernacular - Pushkin created the language of modern Russian poetry. His personal life was made difficult by his conflicts with the authorities who disapproved of his liberal views. Pushkin was born into Russian nobility in Moscow. He published his first poem at the age of fifteen. By the time he finished school his talent was already widely recognized within the Russian literary scene. After school, Pushkin plunged into the vibrant and raucous intellectual youth culture of the capital, Saint Petersburg. Alexandr Pushkin gradually became committed to social reform and emerged as a spokesman for literary radicals. This angered the government, and led to his transfer from the capital (1820). He went to the Caucasus and to the Crimea, then to Kamenka and Chişinău, where he became a Freemason. Here he joined the Filiki Eteria, a secret organization whose purpose was to overthrow Ottoman rule in Greece and establish an independent Greek state. He was inspired by the Greek Revolution and when the war against the Ottoman Turks broke out he kept a diary recording the events of the great national uprising. Around 1828, Pushkin met Natalya Goncharova, then 16 years old and one of the most talked-about beauties of Moscow. After much hesitation, Natalya accepted a proposal of marriage from Pushkin in April 1830, but not before she received assurances that the tsarist government had no intentions to persecute the libertarian poet. Later, Alexander Pushkin and his wife Natalya Goncharova, became regulars of court society. When the Tsar gave Pushkin the lowest court title, the poet became enraged, feeling that the Tsar intended to humiliate him by implying that Pushkin was being admitted to court not on his own merits but solely so that his wife, who had many admirers including the Tsar himself, could properly attend court balls. In the year 1831, during the period of Pushkin's growing literary influence, he met one of Russia's other great early writers, Nikolai Gogol. After reading Gogol's volume of short stories Evenings on a Farm Near Dikanka, Pushkin supported him and would feature some of Gogol's most famous short stories in the magazine The Contemporary, which he founded in 1836. By 1837, Pushkin was falling into greater and greater debt and faced scandalous rumors that his wife had embarked on a love affair. In response, the poet challenged Natalya's alleged lover, her brother in-law Georges d'Anthès, to a duel which left both men injured. Shot in the right lower abdomen, Alexandr Pushkin died two days later.