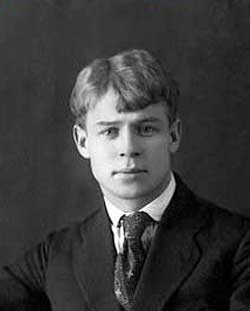 Sergei Alexandrovich Yesenin (sometimes spelled as Esenin, Russian: Серге́й Алекса́ндрович Есе́нин) was a Russian lyrical poet. He was one of the most popular and well-known Russian poets of the 20th century. Sergey Yesenin (Esenin) was born in Konstantinovo in Ryazan Governorate of the Russian Empire to a peasant family. He spent most of his childhood with his grandparents, who essentially reared him. In 1912, Yesenin moved to Moscow, where he supported himself working as a proofreader in a printing company. The following year he enrolled in Moscow Charnyavsky University as an external student and studied there for a year and a half. His early poetry was inspired by Russian folklore. In 1915, he moved to Petrograd, where he became acquainted with fellow-poets Alexander Blok, Sergey Gorodetsky, Nikolai Klyuev and Andrei Bely and became well known in literary circles. In 1916, Sergei Yesenin published his first book of poems: Radunitsa. Through his collections of poignant poetry about love and the simple life, he became one of the most popular poets of the day. His first marriage was in 1913 to Anna Izryadnova, a co-worker from the publishing house, with whom he had a son, Yuri. From 1916 to 1917, Sergei Yesenin was drafted into military duty, but soon after the October Revolution of 1917, Russia exited World War I. Believing that the revolution would bring a better life, Yesenin briefly supported it, but soon became disillusioned. In August 1917 Sergei married for a second time to Zinaida Raikh. They had two children, a daughter Tatyana and a son Konstantin. The parents quarreled and lived separately for some time prior to their divorce in 1921. In September 1918, Sergei Yesenin founded his own publishing house. In the fall of 1921, Yesenin met the Paris-based American dancer Isadora Duncan, a woman 18 years his senior. She knew only a dozen words in Russian, and he spoke no foreign languages. They married on 2 May 1922. Yesenin accompanied his celebrity wife on a tour of Europe and the United States. His marriage to Duncan was brief and in May 1923, he returned to Moscow. In 1923 Yesenin became romantically involved with the actress Augusta Miklashevskaya to whom he dedicated several poems. The same year he had a son by the poet Nadezhda Volpin. Their son, Alexander Yesenin-Volpin grew up to become a poet and a prominent activist in the Soviet dissident movement of the 1960s. He lives in the United States, a famous mathematician and teacher. In 1925 Sergey Yesenin met and married his fourth wife, Sophia Andreyevna Tolstaya, a granddaughter of Leo Tolstoy. On 28 December 1925 Sergey Yesenin was found dead in his room in the Hotel Angleterre. His last poem Goodbye my friend, goodbye (До свиданья, друг мой, до свиданья) according to Wolf Ehrlich was given to him the day before. Yesenin complained that there was no ink in the room, and he was forced to write with his blood. According to the version that is now also common among academic researchers of Yesenin's life, the poet was in a state of depression a week after the end of treatment in a mental hospital and committed suicide by hanging. Other theory claims that he was murderd by Soviet law enforcement agents who staged it to look like suicide. Yesenin's suicide triggered an epidemic of copycat suicides by his mostly female fans. Although he was one of Russia's most popular poets and had been given an elaborate funeral by the State, most of his writings were banned by the Kremlin during the reigns of Joseph Stalin and Nikita Khrushchev. Only in 1966 were most of his works republished. Today Yesenin's poems are taught to Russian schoolchildren; many have been set to music and recorded as popular songs. His early death, coupled with unsympathetic views by some of the literary elite, adoration by ordinary people, and sensational behavior, all contributed to the enduring and near mythical popular image of the Russian poet.