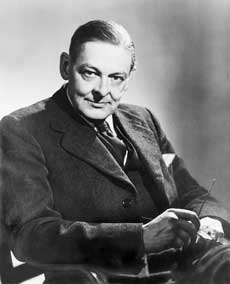 Thomas Stearns Eliot, usually known as T. S. Eliot, was an essayist, publisher, playwright, literary and social critic, and one of the twentieth century's major English poets. Eliot attracted widespread attention for his poem The Love Song of J. Alfred Prufrock (1915), which is seen as a masterpiece of the Modernist movement. It was followed by some of the best-known poems in the English language, including The Waste Land (1922), The Hollow Men (1925). He was awarded the Nobel Prize in Literature in 1948, for his outstanding, pioneer contribution to present-day poetry. For a poet of his stature, Eliot produced a relatively small number of poems. Eliot was born into the Eliot family, a Boston Brahmin family with roots in England and New England. He was the last of six surviving children. Thomas Stearns Eliot attended Smith Academy in St. Louis and then the Milton Academy in Massachusetts. Soon after the turn of the century, Eliot began seeing his poems and short stories in print, and writing would occupy him for the rest of his life. Eliot began courses at Harvard University in 1906, graduating three years later with a Bachelor of Arts degree. At Harvard, he was greatly influenced by professors renowned in poetry, philosophy and literary criticism, and the rest of his literary career would be shaped by all three. After graduating, Eliot served as a philosophy assistant at Harvard for a year, and then left for France and the Sorbonne to study philosophy. From 1911 to 1914, Eliot was back at Harvard, where he deepened his knowledge by reading Indian philosophy and studying Sanskrit. He finished his advanced degree at Harvard while in Europe, but due to the onset of World War I, he never went back to Harvard to take the final oral exam for his Ph.D. He soon married Vivienne Haigh-Wood a Cambridge governess, and took a job in London, England, as a school teacher. The marriage was markedly unhappy, in part because of Vivienne's health issues. The first poem of this period, and the first of Eliot's important works, was "The Love Song of J. Alfred Prufrock," which appeared in Poetry in 1915. His first book of poems, Prufrock and Other Observations, followed in 1917, and the collection established Eliot as a leading poet of his day. While writing poetry and tending to his day job, Eliot was busy writing literary criticism and reviews, and his work in the criticism field would become as respected as his poetry. n 1919, Eliot published Poems, which contained "Gerontion." The poem was a blank-verse interior monologue, and it was unlike anything that had ever been written in the English language. As if that didn't garner enough attention, in 1922 Eliot saw the publication of "The Waste Land," a colossal and complex examination of postwar disillusionment. At the time he wrote the poem, Eliot's marriage was failing, and he and his wife were both experiencing "nervous disorders." The Waste Land almost immediately developed a cult-like following from all literary corners, and it is often considered the most influential poetic work of the 20th century. The same year "The Waste Land" was published, Eliot founded what would become an influential literary journal called Criterion. In 1917, he took a position at Lloyds Bank in London, working on foreign accounts. In 1925 Eliot left Lloyds to join the publishing firm Faber and Gwyer, later Faber and Faber, where he remained for the rest of his career, eventually becoming a director. At Faber and Faber, he was responsible for publishing important English poets like W.H. Auden, Stephen Spender, and Ted Hughes. On 29 June 1927, Eliot converted to Anglicanism from Unitarianism, and in November that year he took British citizenship, renouncing his American citizenship. By 1932, Eliot had been contemplating a separation from his wife for some time. When Harvard offered him the Charles Eliot Norton professorship for the 1932–1933 academic year, he accepted and left Vivienne in England. Upon his return, he arranged for a formal separation from her, avoiding all but one meeting with her between his leaving for America in 1932 and her death in 1947. Vivienne was committed to the Northumberland House mental hospital, Stoke Newington, in 1938, and remained there until she died. Although Eliot was still legally her husband, he never visited her. For his vast influence—in poetry, criticism and drama—T.S. Eliot received the Nobel Prize in Literature in 1948. On 10 January 1957, at the age of 68, Eliot married Esmé Valerie Fletcher, who was 30. In contrast to his first marriage, Eliot knew Fletcher well, as she had been his secretary at Faber and Faber since August 1949. For many years Eliot had suffered from lung-related health problems including bronchitis and tachycardia caused by heavy smoking. He died of emphysema at his home in Kensington in London. Eliot has been one of the most daring innovators of twentieth-century poetry. Never compromising either with the public or indeed with language itself, he has followed his belief that poetry should aim at a representation of the complexities of modern civilization in language and that such representation necessarily leads to difficult poetry. Despite this difficulty his influence on modern poetic diction has been immense.