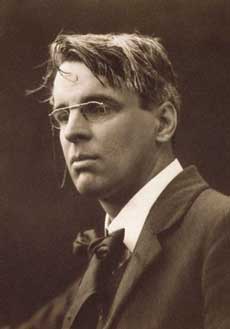 William Butler Yeats was an Irish poet and one of the foremost figures of 20th century literature. A pillar of both the Irish and British literary establishments, in his later years he served as an Irish Senator for two terms. Yeats was a driving force behind the Irish Literary Revival and, along with Lady Gregory, Edward Martyn, and others, founded the Abbey Theatre, where he served as its chief during its early years. In 1923, he was awarded the Nobel Prize in Literature and was the first Irishman awarded. W.B. Yeats was born on 18 June 1865 in County Dublin, Ireland to John Butler Yeats, a lawyer turned portrait painter and Susan Mary Pollexfen, daughter of a wealthy family from county Sligo. His father was a supporter of nationalism and the nationalist movement in the country. Although John trained as a lawyer, he abandoned the law for art soon after his first son was born. Yeats spent much of his early years in London, where his father was studying art, but frequently returned to Ireland as well. In the mid-1880s, Yeats pursued his own interest in art as a student at the Metropolitan School of Art in Dublin. Following the publication of his poems in the Dublin University Review in 1885, he soon abandoned art school for other pursuits. William's upbringing in this type of environment was sure to have an impact on his life and poetry. Yeats' early years are marked by events like rise of the Home rule movement and the momentum of nationalism and a power shift away from the Protestant minority. These events had a deep impact on the young Yeats' mind and would reflect in his literary work. Although he lived in London for 14 years of his childhood (and kept a permanent home there during the first half of his adult life), Yeats maintained his cultural roots, featuring Irish legends and heroes in many of his poems and plays. After returning to London in the late 1880s, William met famous writers Oscar Wilde, Lionel Johnson and George Bernard Shaw. He also became acquainted with Maud Gonne, a supporter of Irish independence. This revolutionary woman served as a muse for Yeats for years. He even proposed marriage to her several times, but she turned him down. He dedicated his 1892 drama The Countess Kathleen to her. Around this time, Yeats founded the Rhymers' Club poetry group with Ernest Rhys. He also joined the Order of the Golden Dawn, an organization that explored topics related to the occult and mysticism. While he was fascinated with otherworldly elements, Yeats's interest in Ireland, especially its folktales, fueled much of his output. The title work of The Wanderings of Oisin and Other Poems (1889) draws from the story of a mythic Irish hero. Yeats married Georgie Hyde-Lees in 1917, and they soon had daughter Anne and son William Michael. The celebrated writer then became a political figure in the new Irish Free State, serving as a senator for six years beginning in 1922. The following year, he received an important accolade for his writing as the recipient of the Nobel Prize in Literature. According to the official Nobel Prize website, Yeats was selected "for his always inspired poetry, which in a highly artistic form gives expression to the spirit of a whole nation." Yeats continued to write until his death. Some of his important later works include The Wild Swans at Coole (1917), The Tower (1928) and Words for Music Perhaps and Other Poems (1932). Yeats passed away on January 28, 1939, in Roquebrune-Cap-Martin, France. The publication of Last Poems and Two Plays shortly after his death further cemented his legacy as a leading poet and playwright. William Butler Yeats was one of the greatest English-language poets of the 20th century, and one of the best and the most famous Irish poets of all time.