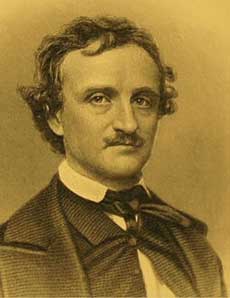 Edgar Allan Poe was an American author, poet, editor, and literary critic, considered part of the American Romantic Movement. Best known for his tales of mystery and the macabre, he was one of the earliest American practitioners of the short story, and is generally considered the inventor of the detective fiction genre. He is further credited with contributing to the emerging genre of science fiction. He was the first well-known American author to try to earn a living through writing alone, resulting in a financially difficult life and career. His tale The Murders in the Rue Morgue (1841) initiated the modern detective story, and the atmosphere in his tales of horror is unrivaled in American fiction. His "The Raven" (1845) numbers among the best-known poems in the national literature. Born in Boston, Poe was the second child of two actors. His father abandoned the family in 1810, and his mother died the following year. Thus orphaned, the child was taken in by John and Frances Allan, of Richmond, Virginia. Tension developed later as John Allan and Edgar repeatedly clashed over debts, including those incurred by gambling, and the cost of secondary education for the young man. Poe attended the University of Virginia for one semester but left due to lack of money. He quarreled with his stepfather over the funds for his education and enlisted in the Army in 1827 under an assumed name. It was at this time his publishing career began, albeit humbly, with an anonymous collection of poems, Tamerlane and Other Poems (1827), credited only to "a Bostonian". With the death of Frances Allan in 1829, Poe and his stepfather reached a temporary rapprochement. Later failing as an officer's cadet at West Point and declaring a firm wish to be a poet and writer, Poe parted ways with John Allan. His ability to make a living was undermined by a general unwillingness of American publishers to publish new American authors since the lack of strong international copyright laws made it more profitable for to reprint British books. In 1831, Edgar Allan Poe went to New York City where he had some of his poetry published. He submitted stories to a number of magazines and they were all rejected. Poe had no friends, no job, and was in financial trouble. He sent a letter to stepfather begging for help but none came. John Allan died in 1834 and did not mention Edgar in his will. In 1835, Edgar finally got a job as an editor of a newspaper because of a contest he won with his story, "The Manuscript Found in a Bottle". In 1836, Edgar married his cousin, Virginia. He was 27 and she was 13. The marriage proved a happy one. Her tuberculosis (which led to her death in 1847) exacerbated his drinking. Some see this loss (coupled with the loss of his mother) as contributing to the frequent theme in his work of a beautiful woman’s death. This theme is perhaps most famously explored in The Raven as the speaker addresses his despondency “for the rare and radiant maiden whom the angels named Lenore." Over the next ten years, Poe would edit a number of literary journals including the Burton’s Gentleman’s Magazine and Graham’s Magazine in Philadelphia and the Broadway Journal in New York City. It was during these years that he established himself as a poet, author, a short story writer, and an editor. He published some of his best-known stories and poems, including “The Fall of the House of Usher," “The Tell-Tale Heart," “The Murders in the Rue Morgue," and “The Raven.” After Virginia’s death from tuberculosis in 1847, Poe’s lifelong struggle with depression and alcoholism worsened. He returned briefly to Richmond in 1849 and then set out for an editing job in Philadelphia. For unknown reasons, he stopped in Baltimore. On October 3, 1849, he was found in a state of semi-consciousness. Poe died four days later of “acute congestion of the brain.” Evidence by medical practitioners who reopened the case has shown that Poe may have been suffering from rabies. Poe’s work as an editor, a poet, and a critic had a profound impact on American and international literature. His stories mark him as one of the originators of both horror and detective fiction. Many anthologies credit him as the “architect” of the modern short story. He was also one of the first critics to focus primarily on the effect of style and structure in a literary work; as such, he has been seen as a forerunner to the “art for art’s sake” movement. French Symbolists such as Mallarmé and Rimbaud claimed him as a literary precursor. Baudelaire spent nearly fourteen years translating Poe into French. Today, Poe is remembered as one of the first American authors to become a major figure in world literature.