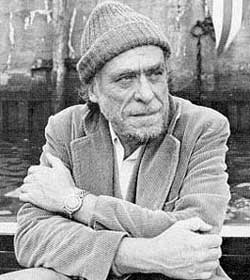 Henry Charles Bukowski (born Heinrich Karl Bukowski) was a German-born American poet, novelist, and short story writer. His writing was influenced by the social, cultural, and economic ambience of his home city of Los Angeles. His work addresses the ordinary lives of poor Americans, the act of writing, alcohol, relationships with women, and the drudgery of work. Bukowski wrote thousands of poems, hundreds of short stories and six novels, eventually publishing over 60 books. The poet's father was a sergeant in the United States Army serving in Germany following Germany's defeat in 1918. He had an affair with Katharina, a German friend's sister, and she became pregnant. Charles Bukowski repeatedly claimed to be born out of wedlock, but Andernach marital records indicate that his parents married one month prior to his birth. However, given the crippling reparations being required of Germany, which led to a stagnant economy and high levels of inflation, Henry Bukowski was unable to make a living, so he decided to move the family to the United States. In 1923, they settled in Baltimore, Maryland. The family moved to South Central Los Angeles in 1930, the city where Charles Bukowski's father and grandfather had previously worked and lived. In the 1930s the poet's father was often unemployed. In the autobiographical Ham on Rye Charles Bukowski says that, with his mother's acquiescence, his father was frequently abusive, both physically and mentally, beating his son for the smallest imagined offence. During his youth Bukowski was shy and socially withdrawn, a condition exacerbated during his teens by an extreme case of acne. After graduating from Los Angeles High School, Bukowski attended Los Angeles City College for two years, taking courses in art, journalism, and literature, before quitting at the start of World War II. He then moved to New York to begin a career as a vagrant blue-collar worker with dreams of becoming a writer. Failing to break into the literary world, Bukowski grew disillusioned with the publication process and quit writing for almost a decade, a time that he referred to as a "ten-year drunk". The result of that period was near-fatal bleeding ulcer, a condition that made him spend some time in hospital in 1955. After leaving the hospital he began to write poetry. In 1955 he agreed to marry small-town Texas poet Barbara Frye, sight unseen, but they divorced in 1958. She later died under mysterious circumstances in India. Following his divorce, Bukowski resumed drinking and continued writing poetry. In the early 1950s, Bukowski took a job as a fill-in letter carrier with the U.S. Postal Service in Los Angeles but resigned just before he reached three years' service. By 1960, Bukowski had returned to the post office in Los Angeles where he began work as a letter filing clerk, a position he held for more than a decade. In 1962, he was traumatized by the death of Jane Cooney Baker, the object of his first serious romantic attachment. Bukowski turned his inner devastation into a series of poems and stories lamenting her death. In 1964 a daughter, Marina Louise Bukowski, was born to Bukowski and his live-in girlfriend Frances Smith. In 1969 Bukowski accepted an offer from Black Sparrow Press publisher John Martin and quit his post office job to dedicate himself to full-time writing. He was then 49 years old. As he explained in a letter at the time, "I have one of two choices – stay in the post office and go crazy ... or stay out here and play at writer and starve. I have decided to starve." Less than one month after leaving the postal service he finished his first novel, Post Office. As a measure of respect for Martin's financial support and faith in a relatively unknown writer, Bukowski published almost all of his subsequent major works - both prose and poetry with Black Sparrow Press. Bukowski embarked on a series of love affairs and one-night trysts. His various affairs and relationships provided material for his stories and poems. In 1976, Bukowski met Linda Lee Beighle, a health food restaurant owner and aspiring actress. They were eventually married in 1985. Beighle is referred to as "Sarah" in Bukowski's novels Women and Hollywood. Bukowski died of leukemia in San Pedro, aged 73, shortly after completing his last novel, Pulp. The funeral rites, orchestrated by his widow, were conducted by Buddhist monks.