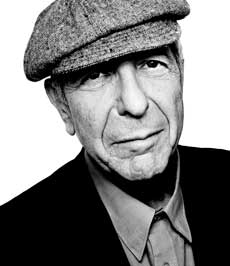 Leonard Norman Cohen is a Canadian singer, songwriter, musician, poet, and novelist. His work has explored religion, politics, isolation, sexuality, and personal relationships. Cohen was born in an English-speaking area of Montreal, into a middle-class Jewish family. He attended Roslyn Elementary School and, from 1948, Westmount High School, where he was involved with the student council and studied music and poetry. He became especially interested in the poetry of Federico García Lorca. As a teenager, Leonard Cohen learned to play guitar, and around the same time, he began writing poetry and novels. Not long after graduating from McGill University, in 1955, he decided to move to New York City. Cohen left New York and returned to Montreal in 1957, working various odd jobs and focusing on the writing of fiction and poetry, including the poems for his next book "The Spice-Box of Earth" in 1961. His father's will provided him with a modest trust income, sufficient to allow him to pursue his literary ambitions for the time, and The Spice-Box of Earth was successful in helping to expand the audience for Cohen's poetry, helping him reach out to the poetry scene in Canada, outside the confines of McGill University. Cohen continued to write poetry and fiction throughout much of the 1960s and preferred to live in quasi-reclusive circumstances after he bought a house on Hydra, a Greek island in the Saronic Gulf. He lived at Hydra with Marianne C. Stang Jensen Ihlen (born in Norway 1935), and the song "So Long, Marianne" was written to and about her. Their relationship lasted for most of the 1960s. Subsequently, Cohen published less, with major gaps, concentrating more on recording songs. In 1978 he published his first book of poetry in many years, Death of a Lady's Man. It was not until 1984 that he published his next book of poems, Book of Mercy, which won him the Canadian Authors Association Literary Award for Poetry. Also in the mid-1960s, Leonard began receiving praise for lyrics made popular by other singers. In 1967, disappointed with his lack of financial success as a writer, he moved to the United States to pursue a career as a folk music singer–songwriter. His song "Suzanne" became a hit for Judy Collins and was for many years his most covered song. Eventually, Leonard had released his first album: "The Songs of Leonard Cohen", which included his version of the song "Suzanne", and also included the popular songs "Hey, That's No Way to Say Goodbye" and "Master Song," among others. Two years later, Leonard released Songs from a Room (1969), featuring the now-famous single "Bird on a Wire." That album was followed by 1971's Songs of Love and Hate, which included the singles "Avalanche" and "Famous Blue Raincoat." Cohen produced three other albums before the end of the decade. After co-writing the soundtrack to the musical film Night Magic, with fellow songwriter Lewis Furey, Leonard Cohen released 1984's Various Positions. The album included one of Cohen's most popular songs to date: "Hallelujah." The song has been covered countless times, including by John Cale and Jeff Buckley, whose renditions—both considered to be smoother, vocally, than Cohen's—received wide acclaim. By the end of the decade Cohen's rep as a sage elder was ultra tight, inspiring doom disciples such as Kurt Cobain, Trent Reznor, and Nick Cave. He spent most of the 1990s becoming a monk on a mountaintop Zen Buddhist retreat in L.A. Although around 2000 there was a public impression that Leonard Cohen would not resume recording or publishing, he returned to Los Angeles in May 1999. He began to contribute regularly to The Leonard Cohen Files fan website, emailing new poems and drawings from Book of Longing and early versions of new songs, like "A Thousand Kisses Deep" in September 1998. In 2005 the singer suffered every boomer's nightmare — his retirement fund was empty. Cohen alleged that former manager Kelley Lynch bamboozled him for more than $5 million, and for all intents and purposes he was broke. He created a short-term fix by hitting the road and touring the globe. Everywhere he went — from Coachella to Glastonbury — kudos followed, and pundits believed him to be at the top of his game. When it came time to give his speech at his 2008 induction into the Rock and Roll Hall of Fame, he recited the lyrics of his "Tower of Song." In January 2012, at the age of 77, Cohen released Old Ideas. In his late 70s, he continues to write music and tour, most recently with a 2012 concert series. Leonard Cohen — whose musical style has been deemed straightforward, prophetic and, at times, seemingly expressionless—has been compared to folk-rock musician Bob Dylan. Though some listeners have strayed away from Cohen's baritone voice and deadpan delivery, he has enjoyed wide critical and commercial acclaim. Cohen has been inducted into both the Canadian Music Hall of Fame and the Canadian Songwriters Hall of Fame as well as the American Rock and Roll Hall of Fame. He is also a Companion of the Order of Canada, the nation's highest civilian honor. In 2011, Cohen received a Princess of Asturias Awards for literature.