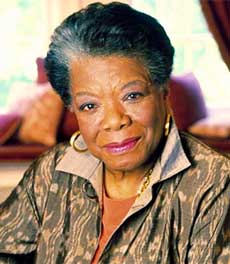 Maya Angelou was an American author, poet, dancer, actress, and singer. She published seven autobiographies, three books of essays, and several books of poetry, and was credited with a list of plays, movies, and television shows spanning over 50 years. She received dozens of awards and more than 50 honorary degrees. Angelou is best known for her series of seven autobiographies, which focus on her childhood and early adult experiences. The first, I Know Why the Caged Bird Sings (1969), tells of her life up to the age of 17 and brought her international recognition and acclaim. After her parents' marriage ended, she and her brother, Bailey (who gave her the name "Maya"), were sent to rural Stamps, Arkansas, to live with their grandmother, who owned a general store. Although her grandmother helped her develop pride and self-confidence, Angelou was devastated when she was raped at the age of eight by her mother's boyfriend while on a visit to St. Louis. After she testified against the man, several of her uncles beat him to death. Believing that she had caused the man's death by speaking his name, Maya Angelou refused to speak for approximately five years. She attended public schools in Arkansas and later California. While still in high school she became the first ever African American female streetcar conductor in San Francisco, California. She gave birth to a son at age sixteen. In 1950 she married Tosh Angelos, a Greek sailor, but the marriage lasted only a few years. In the mid-1950s, Maya's career as a performer began to take off. She landed a role in a touring production of Porgy and Bess, later appearing in the off-Broadway production Calypso Heat Wave (1957) and releasing her first album, Miss Calypso (1957). A member of the Harlem Writers Guild and a civil rights activist, Maya Angelou organized and starred in the musical revue Cabaret for Freedom as a benefit for the Southern Christian Leadership Conference, also serving as the SCLC's northern coordinator. In 1961, Maya Angelou appeared in an off-Broadway production of Jean Genet's The Blacks with James Earl Jones, Lou Gossett Jr. and Cicely Tyson. While the play earned strong reviews, Maya moved on to other pursuits, spending much of the 1960s abroad; She first lived in Egypt and then in Ghana, working as an editor and a freelance writer. Angelou also held a position at the University of Ghana for a time. In Accra (Ghana), she became close friends with Malcolm X during his visit in the early 1960s. After returning to the United States, Maya Angelou was urged by friend and fellow writer James Baldwin to write about her life experiences. Her efforts resulted in the enormously successful 1969 memoir about her childhood and young adult years, I Know Why the Caged Bird Sings, which made literary history as the first nonfiction best-seller by an African-American woman. The poignant work also made Maya Angelou an international star. Angelou wrote several autobiographies throughout her career, including All God's Children Need Traveling Shoes (1986) and A Song Flung Up to Heaven (2002), but 1969's I Know Why the Caged Bird Sings continues to be regarded as her most popular autobiographical work. She also published several collections of poetry, including Just Give Me a Cool Drink of Water 'Fore I Die (1971), which was nominated for the Pulitzer Prize. She also wrote a number of inspirational works, from the essay collection Wouldn't Take Nothing for My Journey Now (1994) and Letter to My Daughter (2008) where she uses her experiences to teach young women how they can find empowerment. One of Angelou's most famous works is the poem On the Pulse of Morning, which she wrote especially for and recited at President Bill Clinton's inaugural ceremony in January 1993—marking the first inaugural recitation since 1961, when Robert Frost delivered his poem "The Gift Outright" at President John F. Kennedy's inauguration. Maya Angelou - The Phenomenal woman - died on the morning of May 28, 2014.